Friendly warning: this post contains minor spoilers for the plot for the Kingdom Hearts series prior to Dream Dream Drop Distance HD.

Like many gamers, I’ve found that the pending release of Kingdom Hearts 3 has piqued my interest in the Kingdom Hearts series. To that end I commenced playing through the entire back catalogue last May, and I recently completed Kingdom Hearts Dream Drop Distance HD.

Originally released on 3DS in 2012, Dream Drop Distance picks up after the events of Re:Coded, and sees Sora and Riku embark  on their mark of mastery exam in readiness to face the pending threat of Xehanort’s return. To this end, it’s one of the games that is acting as a narrative bridge between Kingdom Hearts 2 and Kingdom Hearts 3.

For anyone who’s played one of the Kingdom Hearts games, it’s familiar fare. Dream Drop Distance is a fun action RPG with a compelling and at times emotional plot as Sora and Riku journey through sleeping worlds in order to unlock seven sleeping keyholes. Despite treading familiar ground for Kingdom Hearts games, there are a few innovations worth noting in Dream Drop Distance:

New worlds: one of the biggest weaknesses of the Kingdom Hearts series (especially when playing through them over a relatively short period) is a lack of variety in the Disney properties they incorporate. The good news for those who’ve played previous games, is that Dream Drop Distance is largely composed of worlds that are new to the series. Bringing a very welcome sense of variety. And for those areas that are revisited, they are vastly differently or expanded from their previous iterations, which gets rid of the sense of deja vu that’s present in some earlier entries in the series. 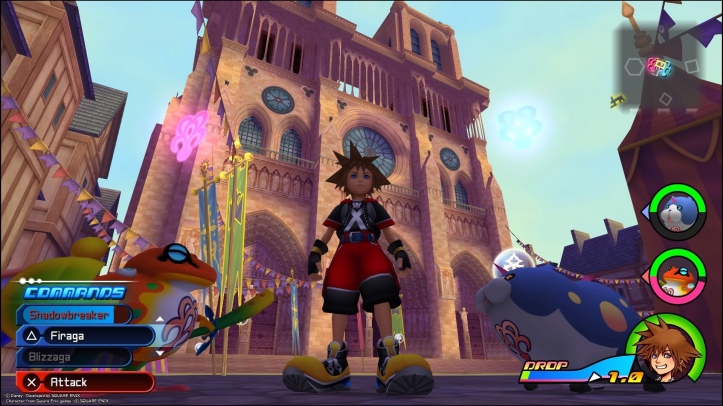 Playable characters: in Dream Drop Distance you played as both Sora and Riku, again providing some variety. Personally, I find Riku’s character much more compelling than Sora, so it’s exciting to get to play as him for the first time since Re:Chain of Memories. That said, the game forces you to alternate between the two using the ‘drop’ system, where it effectively counts down until you’re forced to switch. This feels a bit contrived, and started to increasingly irritate me when I was partway through a world as one character and had to abandon it to come back later.

Dream eaters: travelling through Dream Drop Distance‘s world, you’re accompanied by cutesy looking spirits. My experience with them ranged from the innocuous to the downright frustrating. This was especially so in some of the later boss fights, when my spirits would semi-frequently decide to stand between me and the boss. Thankfully, they can be mostly ignored, but they did cause me to be defeated in battle a few times more than I would have liked.

Flowmotion: by far the most interesting innovation in the game is flowmotion, a new mechanic to the series that allows you to interact with environmental objects such as walls, lampposts and railings, propelling yourself off of them to perform attacks. For me it added a new level of fluidity and strategy to the action within Dream Drop Distance, helping it to move away a bit from the button mashing nature of previous games. It’s a mechanic that’s subsequently featured in Kingdom Hearts 02: Birth by Sleep – a fragmentary passage and is going to be in Kingdom Hearts 3. So it’s an exciting glimpse of what we can expect in 10 days’ time!

For me, Dream Drop Distance has continued my love affair with a series with which I’d rapidly fallen in love. It’s brought the right amount of new ideas (it is after all the seventh entry in the series), and it had just about the right level of difficulty for me: neither so easy as to leave me bored, nor so difficult that it had me effing and blinding (too much) at the TV.

Kingdom Hearts Dream Drop Distance is a really enjoyable entry in the series, and one I suspect I’ll replay before too long.

Dream Drop Distance is available on the 3DS or as part of the Kingdom Hearts HD 2.8 Final Chapter Prologue or Kingdom Hearts – The Story So Far collections on Playstation 4.